It’s been a while since I did a Dinosaur Profile so I figured I’d do a new one today.  While flipping through an online list of dinosaurs, I discovered the Rugops.  I did some digging into it and decided to write about it today as part of the Dinosaur Profile series.

Rugops name literally means “wrinkle face”, something modeled fairly well on the image above.  It is estimated as being twenty feet long and known only from a single specimen.  It is postulated that the arms were short and stubby like most other theropod dinosaurs. Evolutionists call these arms “vestigial”. The only specimen was found in the country of Niger in Africa. Evolutionists tell us Rugops lived in the Cretaceous period, approximately 95 million years ago.  The skull is riddled with artery and vein canals, as well as small holes, suggesting a potential set of spines or sail atop Rugops head, likely used for warming itself in the morning based on the amount of blood vessel space.

In the Garden of Eden, Rugops, with the potential sail atop its head, would likely have been found munching on high tree branches. At it’s postulated length of twenty feet, it would have been likely been found alone, or in very small groups, seeking out favorite foods.  Post fall, it would likely have been a terror to domesticated animals with no defenses, such as sheep, and have been on the proverbial “clean up crew” scavenging dead, diseased and injured prey.

You might be thinking at this point that I haven’t put very much detail into this article. You would be right. You may also be noticing that I used the word “postulated” a lot.  I did that deliberately.  The reason I picked out Rugops for this article, about which so little is known, is to expose something that evolutionary scientists do all the time, that is willingly deceive the public.  The photograph above of Rugops provides an excellent example. It portrays a full body of Rugops walking through a forested area.  There is just one problem with this. Remember I mentioned earlier that there was one specimen of Rugops found. This is it. 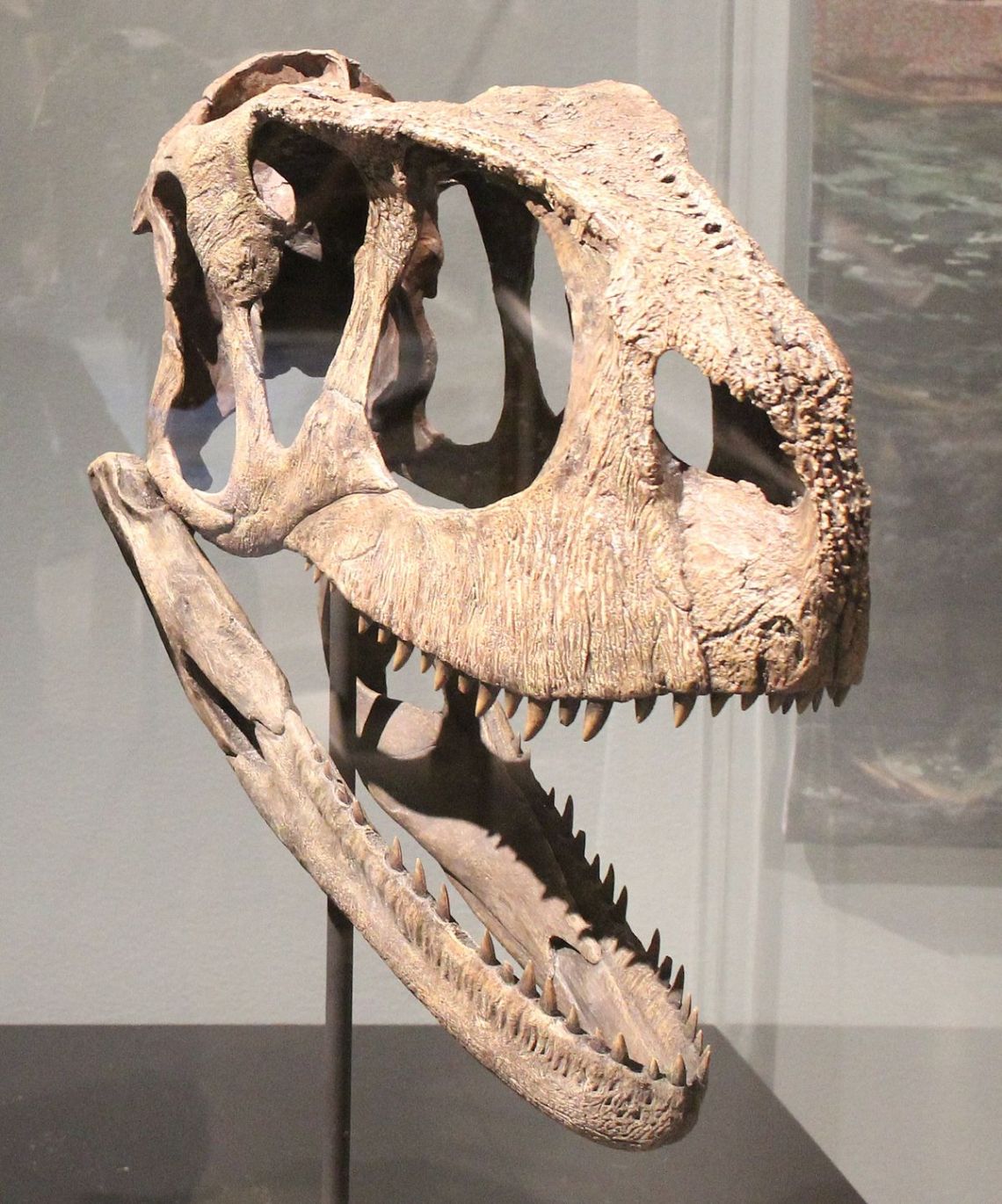 Yes, that’s right, all that was found is a skull.  And the skull in the image is a restored skull, so parts are made of plaster.  And yet, evolutionists call the arms vestigial. There are no arms! How can you know they are vestigial when you didn’t find them? Evolutionists claim that Rugops was 20 feet long. How they know that simply from it’s head is beyond me. Certainly, you can extrapolate somewhat, but claiming it as fact is absolutely absurd and dishonest.  The Dinopedia website says that Rugops was 8 feet tall at the hip. Funny, I don’t see any legs to measure that with.  Unfortunately, what has happened with Rugops is the norm in the scientific classification of fossils. My recent article about Nyasasaurus mentioned that it was known from just a few bones. It is absurd that an honest scientist can classify based on a couple of neck and backbones, found separately I might add, and a partial forearm.  I’ll be putting up an article detailing this and citing some examples, possibly even recommending some new classifications.

So do I think Rugops is it’s own species? Yes, despite all of what I said in the above paragraph, Rugops should be a new species of the Tyrannosaurid kind. I’m basing this on the blood vessel pathways found in it’s skull. However, Rugops should not, most likely, have it’s own genus as it does now.  It likely should be classified as variety of Abelisaurus, which is the family it is currently based in. If there is interest, I’ll attempt to reclassify Rugops correctly in a future article, though this will be somewhat arbitrary based on the evidence at hand.