In the previous article,  which I will link to at the end of this article, I discussed the basics of jellyfish. I went over the basic information regarding jellies including such things as reproduction, feeding, and locomotion. This article will be focused solely on two key points. The first one is how a creature with a poisonous sting could have been created “very good’.  The second is how jellyfish defy evolutionary pattern.  Let’s dive in.

I’ve spoken previously about numerous creatures which do not appear to have been created very good. One article I did was devoted solely to the concept of venom and how such a poisonous substance could be considered very good. I’ll link that article at the end of this article as well for reference.  The neurotoxicity of jellyfish would go along very well with what I wrote there.  In the world God originally created, jellies food source was algae. Now since algae has no nervous system, at least so far as we know, the neurotoxin could not have been designed for use against algae.  There are a number of possibilities available here. Jellies could have not had the neurotoxin available to them until after the fall, when God placed it in their DNA.  However, this assumes that God performed creative acts after He rested the seventh day, which is not stated in Scripture and is thus a last resort. Their are better alternatives available. The information could have been in the jellies DNA, but was not manifested until after the fall.  Due to the rate of reproduction in some jellies, this would have required God to put an unknown gating mechanism on the DNA blocking it from manifesting in the offspring. The curse of sin would have broken this gating mechanism, allowing it to manifest in the offspring.  A third option would have been for all living creatures to be immune to the neurotoxins produced by the jellies until this protection was removed due to the curse.  The first requires a special creative act of God, the second two merely require the curse of sin to apply in different ways.

Now that we have established how jellies can be called very good, let us examine how they defy evolutionary theory. I have divided this into several parts for easier understanding. The first part regards jellyfish reproduction.  In the previous article, I included a graphic from the National Science Foundation which shows a simplified version of jelly reproduction and I have included it below for reference.

Note that jellies go through two different stages of existence. The free-floating medusa produces the gametes.  These gametes combine to form the larval jelly. The larva then seeks out the seabed where they form polyps. These polyps grow and develop until they reach a point where a new medusa buds off from it and new jellies are formed.  Multiple young jellies can be formed from a single polyp.

With the refresher out of the way, let’s look at the problems the jellies reproductive cycle produces for evolutionary theory.   We will ignore, for now, the problem posed by the fact that there are two genders, and instead focus on the two developmental stages of the jelly. Remember, evolutionary theory requires that the fittest organisms survive.  An organism that requires two life forms surely should be out-competed by organisms that directly produce offspring.  Consider the number of steps required just to reach the polyp. How does the larva know, from an evolutionary sense,  to head for the seabed and settle down? How could such a complete metamorphosis from a larva to a polyp evolve? Then how could the polyp develop into a medusa?  These are questions evolutionists must answer.  And yet they have no answers.  There is plenty of speculation, but no evolutionary ancestor, nor is there any pathway by which the jelly reproductive cycle could have formed.

A second issue is the jelly nervous system. Jellyfish do not have a brain. However, they have a quasi-central nervous system.  This takes the form of something called a nerve net.  The nerve net connects the various motor neurons. The place where two of these nerves intersect is called a synapse.  These synapses allow nerve signals to travel both directions in the nerve net, allowing the jelly to coordinate the motion of its bell, and swim efficiently.  This works for most jellies, but some do not use a nerve net, relying instead on separated nerve rings. The input to this nervous system comes through a structure called a rhopalium, which contains the ocelli and statocysts. Ocelli function like eyespots, differentiating between light and dark, while statocysts are gravity sensors, enabling a jelly to swim right side up.

The evolutionists have significant issues with the jellyfish nervous system.  The nerve net functions as a pseudo-brain for the jelly. The issue here is how the nerve net developed.  Where could such a complex system come from? The obvious answer is that it was designed, but, evolutionarily speaking, there had to be a jump of point for development. How did the jelly develop statocysts or even recognize it needed the ability to determine up and down? How could evolution integrate the senses the jelly need, such as the ocelli and statocysts into the neural network? These are questions which demand answers. 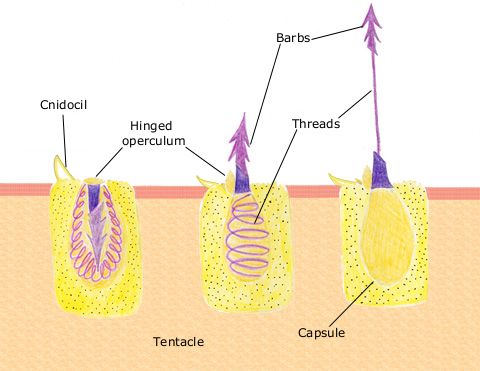 It can take as few as 700 nanoseconds to discharge this cnidocyte completely. For reference, a second is made up of one billion nanoseconds. This is the structure jellies use to trap their prey and bring it into their mouth.  Most jellies use a neurotoxin to paralyze their prey. This neurotoxin is what gives the jelly its painful sting and is inflicted by the cnidocyte.

This is where the problems begin for the evolutionist. A cnidocyte is an example of an organ which is “irreducibly complex”. Dr. Michael Behe, a biochemist, and avowed evolutionist, developed the term. Dr. Behe is credited with sparking the intelligent design movement, a movement he partially adheres to.  His idea of irreducible complexity essentially means that something is stripped down to just the barest essentials but is still functional. A cnidocyte, in order to function, requires certain basic functions.  It requires a storage vessel for the threads. It requires a trigger device. It requires a barb to penetrate what it is fired at.  Take away any of those three parts, and the cnidocyte does not function. Thus all three must have come into existence at the exact same time in order for the cnidocyte to function. Since evolution requires slow, gradual change, it cannot explain the cnidocyte. Evolution also struggles to explain why a cnidocyte is able to fire repeatedly.  Suppose a cnidocyte did miraculously evolve and then was brushed by something, causing it to fire.  It would then be useless if no mechanism had evolved to reload it, so to speak. Yet this is not what we observe.  Further, why do cnidocytes not fire when jellyfish tentacles brush against one another? How does the cnidocyte know that the jellyfish tentacle is friendly and, more importantly, where did that knowledge come from? Evolution has no answer for these questions.

Creation, by contrast, explains jellies quite well. Their neural network was designed to function the way it does by an all-wise Creator. Their cnidocytes have an innate ability to identify self because that ability was put there by God.  Jellies follow the two-part reproductive cycle because that is how God designed them to work.  It takes far less faith to believe in a Creator who could form the jellies as He chose, than it does to believe in mindless random chance blindly tempering jellies together in a haphazard fashion, yet producing a quality result.