One of the most interesting features in the animal kingdom is echolocation. Used by animals as various as bats, whales, and some birds, echolocation allows animals to form images in their brain by using sound waves. In this article, I will be discussing the use of echolocation in the toothed whales specifically. I may come to bats in another article. I will discuss how echolocation works and how it plays into the origins debate.

The first thing to discuss is exactly how echolocation works. It is based on the emission of sound. In dolphins, it works by the dolphin breathing out through its nose.  The dolphin emits sound waves which travel through the water until they meet a solid object. They then rebound back through the water to specialized organs in the dolphins head. These organs, located in the dolphin’s forehead and lower jaw, absorb the return sound. The information received is forwarded to the brain, via the ears. The brain interprets the sounds and is able to determine a wide variety of information about the return sound. Not all dolphin sounds are used in echolocation. Some are purely social. These are beyond the scope of this article, however.

Unlike humans, dolphins do not have vocal cords. The high pitched, high frequency clicking noises are produced in the nasal passages using what are called “phonic lips”. Dolphins force air through these gateways in the nasal passages, producing the high-frequency clicks. Once the sounds have been produced in the nasal passages, they are passed through a specialized organ in the forehead, called the melon.  This organ amplifies the sound as it passes through it, and releases it into the water.  Because it is high frequency, the clicks have a short range, capping off around 200 meters, or roughly 656 feet.   The sounds travel freely through the fluid medium of water. When they strike an object, such as a small mackerel, they rebound in the direction they came, just as sounds do in the air.  When these sounds reach the dolphins, specialized high concentration lipid areas in the lower jaw receive the sound.  Based on how long the return takes, the intensity and pitch, the dolphin can determine a vast range of information. This is including but not limited to such things as size, shape, distance, speed, direction of travel, and even partial internal structure of the target if it is close enough. This effectively give the dolphin a method of double sight, as they are able to see with both their eyes and “see” with echolocation.   Dolphins do have decent eyesight, but combining this with echolocation is extremely beneficial. 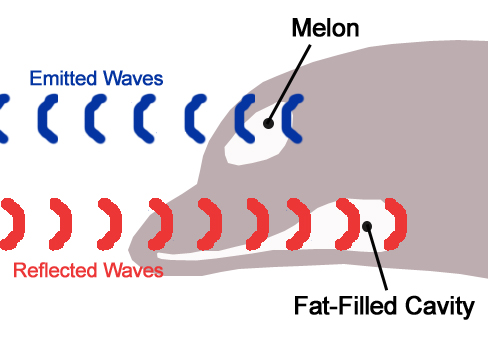 Evolutionists struggle with the origins of echolocation. The benefits are obvious but acquiring the benefits is the tricky part.  Evolutionists have focused fairly heavily on this issue, with a google search for scholarly articles regarding the evolution of echolocation in dolphins yielding nearly 9,000 results.  However, it appears that most of these studies have attempted to link bats and dolphins as having convergently evolved, rather than explain how echolocation came into existence in the first place.  An article published last year accidentally admits that evolutionists have no idea how echolocation came into existence. Published on the palaeocast website in April 2016, an article covering the release of a study on how early dolphins had the ability to echolocate, closed with these words: “The next step is to understand exactly when and how echolocation evolved. We now know it was present at least 26 million years ago, but just how early did it appear in the odontocete record?” In other words, evolutionists have no idea how echolocation first appeared, despite nearly 9000 scholarly articles written about echolocation.  This is a massive issue for evolutionists.

The reason evolutionists have such an issue if they cannot account for the origin of echolocation comes down to the basic issue of complexity.  The echolocation system is irreducibly complex. It requires four specialized parts: the melon, the lipid receptors, and the nasal passages complete with the specialized phonic lips. Excluding the nasal passages, none of the other parts have another known function. They are exclusively used for producing sound. Thus the system of echolocation is irreducibly complex, unable to function properly without those parts. This is a problem because it means that all four parts must be in place simultaneously, all in working order, for any of them to have any value. Since evolution requires slow gradual changes to put together systems, this puts a damper on their theory. A blind chance process could not guarantee to have those four parts all in place at the same time. Evolutionists must explain how this system came into existence and how all the parts could have come together simultaneously. If it cannot answer this question, then it fails as a theory.