Decided to switch it up a little bit today and write something educational. I recognize that many of the people who read this blog regularly are not trained in the sciences. Thus when I discuss things with long complicated names such as ribonucleic acid and deoxyribonucleic acid, people instinctively begin to skim read.  Therefore I’ve decided to make sense of those terms for you today and also explain why they fit much better into a Creationist worldview than a secular worldview.

So what exactly is deoxyribonucleic acid? As you may have figured out by the title of the article, it is more commonly referred to as DNA.  But what is DNA? DNA is the information required for life to exist. Almost every living organism has DNA in some form or another.  It is the genetic code which contains the information required for the manufacture of amino acids.  An amino acid is defined scientifically as “any of a class of organic compounds that contains at least one amino group, –NH 2, and one carboxyl group, –COOH: ” according to dictionary.com.  However, in layman’s terms, they function as the building blocks of proteins. Proteins, in a general sense, are what makes up the cell.

The DNA molecule is made up of three separate parts.  The first part is a deoxyribose molecule. Ribose is a type of sugar and the “deoxy” prefix simply means an oxygen atom has been removed from the molecule.  This lack of oxygen is important because it allows DNA to form its signature double helix shape which you can see in the above photograph and which I will discuss more, later. The second part of DNA is a phosphate base.  This helps the DNA strand absorb and release energy. The third part of DNA is the part most people are most familiar with: the four (five) nitrogenous bases. These are simply chemical compounds containing both a carbon and nitrogen atom.  They are what determines the information stored in a DNA strand. Because of this key function, they are the most commonly discussed part of DNA and are what we will focus on for much of this article.

As noted above, there are four nitrogenous bases in DNA. However, there are actually five total nitrogenous bases involved in the use of DNA. We will come to the fifth one in a moment. The four found in DNA are Adenine, Guanine, Cytosine, and Thymine. They are often abbreviated by their first letters as A G C T.  These bases are special in that they will only ever bind to one other specific base. In other words, Guanine will only ever bind to Cytosine and Thymine will only ever bind to Adenine.  Adenine is the exception to this, as it will bind to Thymine and the fifth base which we will discuss later.  Thus all DNA code is made up of a combination of just four different nitrogenous bases arranged in different ways. How these nitrogenous bases are arranged, signifies what amino acid they code for.  Below is a table which shows you what each possible combination codes for. As you can see from the table, some of the trios of nitrogenous bases, called codons, do not code for amino acids. Instead, they function as brakes in the transcription process which we will discuss further in a moment. The rest of the codons code for a given amino acid. Note that some amino acids, such as Phenylalanine (Phe),  are coded for by multiple codons. 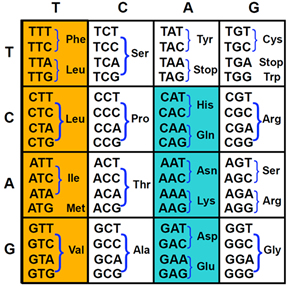 Of course, having all this information stored in the DNA double helix is great, but if there is no method to get that information out of the DNA and into the nucleus itself. This is where the processes of transcription and translation come into play. The two processes take the information in DNA and make it usable for the cell.

Transcription is the process that the cell uses to take the information from DNA and convert it to RNA. RNA is known as ribonucleic acid. It differs from DNA in that the ribose sugar is fully oxygenated and it uses one different nitrogenous base.   Instead of Thymine, RNA uses Uracil, abbreviated U.  The reasoning behind this is simple. Uracil takes less energy to make than Thymine.  This begs the question of why Uracil is not found in DNA. This is due to the fact that, when Cytosine breaks down, it produces Uracil. If DNA contained Uracil, the mechanisms that check DNA strands for damage and mutations would have difficulty telling the difference between good Uracil and bad Uracil.  However, since DNA was designed without Uracil, this is not an issue.  During transcription, the DNA double helix partially unzips, at the exact spot where transcription needs to occur. An RNA strand then comes in and the bases begin to pair up exactly with their counterparts.  This occurs on one side of the helix only, called the template strand.  Below you can see an illustration of how this process works.  Once the RNA strand has been completed, it leaves the nucleus and heads into the cytoplasm of the cell for translation.

The translation process takes the information the RNA has transcribed from the DNA helix and turns it into amino acid chains, which will fold into proteins, with some help from cellular ribosomes.  Ribosomes are made of a type of RNA, which is specialized to create chains of amino acids. Another type of RNA brings the amino acids to the ribosomes, which then, based on the RNA strand presented to it, creates long chains of amino acids, known as polypeptides.  These polypeptides will eventually be shaped into proteins.

Now that I have given you a basic understanding of DNA and how it works (I hope), it’s time to discuss why this whole process matters in the Creation vs Evolutionism debate.  Evolutionists have a problem with DNA on multiple levels. Probably the most obvious problem is that of information. Information requires an informer.  Somehow there had to be a beginning for the information in DNA.  I did a quick google search to see if evolutionists had any proposed explanation for the origin of information.  The closest thing I could find to an attempt at an explanation was that somehow RNA managed to evolve from the primordial soup and also replicate itself.  This neither explains how the information got into the RNA in the first place, nor how RNA, which cannot currently replicate itself, managed to do so. It is pure conjecture because they do not wish to consider the alternative.

Information is not the evolutionists only problem with DNA however.  There are countless details about the entire process of translation, transcription, and the double helix itself which beg for an evolutionary explanation. For example, how do evolutionists explain the more energy efficient Uracil being absent from DNA? Surely expending less cellular energy would have been the favored route if evolution were true.  Another question is how does the cell know where to unzip the double helix so that exactly the right strand of amino acids is formed? These are not trivial questions for they deal with the very ability of life to succeed.  Evolutionists must have an answer for these, or their theory fails as an explanation for life’s origin.  Creationists, of course, have no issue with this. We can simply point to an omniscient, all-powerful Creator who knew exactly how to design DNA so it would work in the magnificent way that it does.

Evolutionists may mock our reference to a Creator as a retreat from science and, to an extent, it is.  I do not claim that the idea of a Creator God has any basis in observational science, as He cannot be observed, tested or repeated. However, for evolutionists to laugh at us for discarding science is hypocritical at best, for they also discard science. Life’s origin was not observed, cannot be tested, and has never been repeated.  For them to claim that DNA evolved from a self-replicating RNA and that the intricate processes involved in transcribing and translating DNA are works of mindless blind chance is pure speculation at best. Observational science demands evidence.  Other than the obvious design present in nature, I cannot present evidence for my belief in a Creator God, and therefore admit that my view of origins is not strictly scientific. Where is the proof of evolution? Where is the observational evidence that proves that evolution is a part of science? I have yet to be confronted with any, nor has any evolutionist ever sufficiently been able to answer where the information originated.   Creationists are not faced with that dilemma. We can point to our Creator as the source of information and the former of life.