I’ve been previously critical of the Southern Baptist Convention, specifically their president JD Greear, who pastors a megachurch in North Carolina. Previously my criticism of him has been limited to his fundamental misunderstanding of the doctrine of separation, as well as his endorsement of old-earth creationist Ken Keathley’s book.  However, he has since given me ample reason to ramp that criticism up, as well as my criticism of the convention as a whole, at least as long as the SBC is led by Greear.

Greear’s church is quite large, with several campuses. Like most other megachurches, his church operates small groups. One of his small group leaders, who seems to have a very high opinion of him, is pro-choice who has talked about volunteering at Planned Parenthood and hangs out with a who’s who of blue check leftists evangelical leaders on twitter. This has been well documented by Reformation Charlotte, a reformed discernment blog. Normally I avoid discernment blogs like the plague. A lot of them are wildly speculative or make a lot of unsubstantiated assertations. However, I have gone back and verified every screenshot they have in this particular article and they are accurate.  I cannot however verify the video at the end of the article.  Do as you choose with that information.

As president of the convention. Greear gets a lot of attention. Perhaps that explains his latest stunt.  One of his staff pastors lead a protest against racism and Greear promoted it both to his church and the world. Now normally, I’d have no issue with an anti-racism protest. There is only one race and anyone who says differently is both theologically and scientifically wrong. All are equal before God. However, as you can see below this is not about protesting racism.  Note that the protest is about social injustice. This implies systematic racism, white privilege, and so on.  Greear has jumped the shark to embrace an anti-Christian ethic, even if he does not realize it. 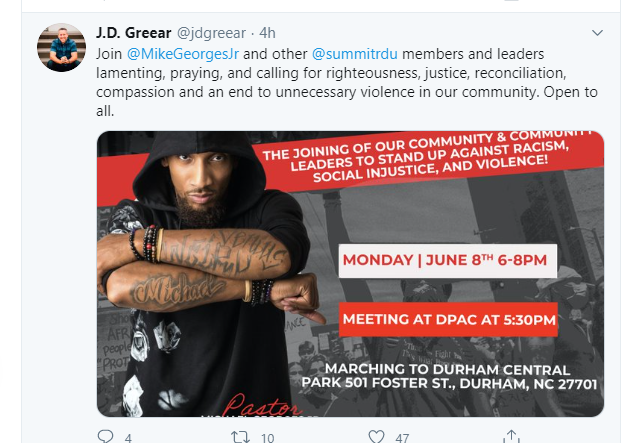 Further, Greear is being remarkably two-faced here. His churches have not met for in-person worship due to the coronavirus in months and announced on June first that they would not meet in person until at least July.  It’s almost like cultural marxism is more important than worshipping God in the manner He commanded in Scripture (Hebrews 10:25). While I do not agree with him on numerous things, I think Dr. James White is right about one thing for certain: social justice and critical race theory are the new religions of many in the church.

Greear is not only allowing sin in his church, as leader of his denomination he is also doing nothing to call out the wickedness that is going on in it. In fact, he is encouraging it. In his presidential address on June 9, Greear attacked those who believe All Lives Matter, rejected the use of statistics to demonstrate the lies of Black Lives Matter and endorsed the Black Lives Matter movement, while carefully not endorsing the organization. He also referred to the Black Lives Matter movement as a “Gospel” issue. Folks, no skin tone issue is a Gospel issue. The Gospel applies equally to all men, no matter their skin tone.  No wonder he was out protesting and pro-choicers are allowed public positions of leadership at his church. Greear himself appears to changed teams. At the bare minimum, he should not be a pastor in any orthodox church.

The wickedness Greear has permitted unchallenged in the SBC  has been extensively documented elsewhere, I won’t go into all of it. For an excellent critique of the SBC’s embrace of critical race theory under Greear, watch By What Standard? from Founders Ministries.  I will, however, point out that there has been little to no pushback from the SBC hierarchy on the closure of churches, nor has Greear or anyone in power in the SBC offered substantial comment condemning the looting or the murder of numerous “black” police officers in the rioting (though Greear did take time to mourn the passing of Captain David Dorn, he was careful not to take a strong stance condemning the looting that caused Dorn’s murder).

Worse, people within the denomination have openly sided with the lawbreaking, property destroying and in some cases, murderous, rioters. Consider these tweets, one from Ed Stetzer, a hardened theistic evolutionary leftist, and one liked by former conservative darling, Beth Moore.

Folks, social justice, and critical race theory have become a religion. You are not allowed to be a Christian at a protest trying to reach people with the Gospel. You have to fully adopt the critical race view and work to support this new faith, one Beth Moore appears to have converted to as well.  And the head of the SBC, instead of trying to steer his denomination back to Scripture, is out pushing the social justice narrative while refusing to have in-person church services. As I noted on Twitter the other night, with leadership like this, the SBC does not need enemies. They have already been devoured from within.

However, we can learn from this. Specifically, we must be careful to exercise proper Biblical understanding and proper application of church discipline in order to keep our churches safe from the polluted doctrines of this new religion. I predict that critical race theory and social justice will be the new frontline in apologetics, with which apologists much content in order to even get to the Gospel. As such, we will begin featuring more articles (not every week, the recent articles are a response to the rioting and George Floyd’s death and will be ceasing soon) on this topic. We will attempt to steer clear of the political implications as much as possible, but we as apologists need to understand what is going on. Greear and the SBC are only the tips of the iceberg. The tentacles are everywhere. I’ve seen it throughout my personal friends, even those who used to be conservative. We need to be prepared for the inevitable explosion of critical race theory, social justice and intersectionality.

Do you know what’s going to happen when you die? Are you completely sure? If you aren’t, please read this or listen to this. You can know where you will spend eternity. If you have questions, please feel free to contact us, we’d love to talk to you.